HomeBlogMonster book om WriteReader app - Don't miss reading about it!
Back to Blog

Check out this interesting feedback of WriteReader app by a Kindergarten teacher, Laura Donovan of how she tried the app with her students by involving them on her long time favorite Monster story. The app was a smashing hit with her students where they loved describing the monsters in their own way. Who knew monsters could be so much fun this Halloween! See more details on the activity below.

October is always a fun month in kindergarten. The children are settled into the daily routines of school and ready to learn! One of my favorite October stories to read to the children is Go Away, Big Green Monster by Ed Emberley. It is a great book to introduce simple descriptive vocabulary to young students. I decided to use the Sago's Mini Monsters app to have the children create their own monsters. Once they created one, they had to list two identifying details for it. Our next step was to import those monsters into a fantastic book-making app called WriteReader.

I really like this app because it allows the child to use "kid spelling" for their own writing and an adult to use conventional/book spelling for that same sentence. The children also did a voice recording of their sentence.

Another fun activity was using YakItKids to create a talking monster who would state its two descriptors. The children could choose either a high or low pitched voice for their monsters. Even though creating virtual monsters is really cool... it's also exciting to transform that virtual monster into an art project. We collaborated with the art teacher to re-create our monsters out of construction paper. Check out few pages from the monster books below. 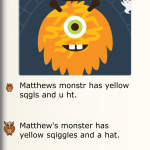 Receive our newsletter with tips and news.